One Sunday after the service at St. Andrew’s United Church, Westmount, a friend of my mother’s commented on an article in the Westmount Examiner. My mother said she didn’t read that paper as she’d never lived in Westmount. “Yes you did dear,” my father replied, “but you didn’t like it!”

My parents, Donald William Sutherland and Dorothy Isabel Raguin were married on June 25, 1948. The recent war and the return of the soldiers made finding apartments very difficult. That summer they lived in Dorothy’s family home on Woodbury Ave in Outremont. Her parents, Beatrice and René Raguin were spending the summer at their cottage in Dunany, north of Montreal. Come fall and the return of the Raguins, there was no room for them there so they moved in with Donald’s mother, Minnie Eagle Sutherland and his sister, Dorothy on Arlington Avenue in Westmount.

My mother found it difficult being a new bride and living with her mother-in-law. She didn’t have much to do. Two women came in to do the housework. Mrs Mikalachki did the heavy work and Mrs Boutilier the light cleaning and ironing. When Mom tried to do things for her husband she came up against Minnie Sutherland, a proud, willful woman who wanted all things done her way. Dorothy had been a Wren during the war and worked as a sick berth attendant in Halifax, Nova Scotia.  On leaving the navy, she renewed her teaching certificate and taught at Iona School in Montreal up until the day of her marriage. Sitting around listening to her mother-in-law tell her how things should be done wasn’t making her happy. She certainly didn’t want to start a family living there.

Luckily, one of her husband’s friends had an apartment on Maplewood (now Edouard Montpetit). He and his wife had bought a house and offered to have the apartment lease transferred to Dorothy and Don. My mother was thrilled with her own place but my father hated paying rent. My sister, Elizabeth Anne was born there and it was up to my mother to push the baby carriage to the post office to pay the monthly rent.

In the early fifties, the construction of new houses increased so my parents looked for a home to buy. What had been farmland and apple orchards in western Notre Dame de Grace were now streets with semi-detached brick houses. The show house on Cumberland Avenue, little longer and wider than others on the street was the one my father wanted. It had three bedrooms, a large basement and a good-sized backyard. The house was purchased on February 21, 1951, my sister’s first birthday. It was bought for $19,000 with a small mortgage. My father hated the mortgage payments and paid it off as quickly as he could.

One child soon became four with the births of Mary Ellen, Donald John and Dorothy Jean. The house became too small. My parents considered moving, although they liked the area. They looked at houses in the West Island of Montreal, but none were just what they wanted. So, in 1960 they had an addition built onto their house. A bedroom, bathroom and den were built over the garage and the kitchen was enlarged, including a laundry room. 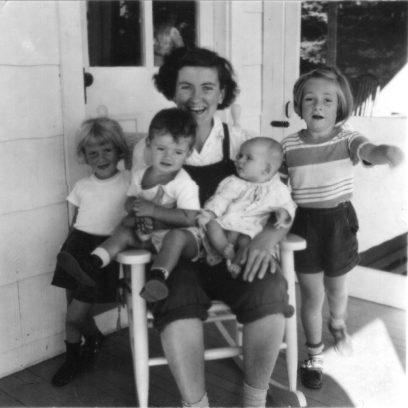 In the mid-sixties, it became apparent that both grandmothers would soon need help. My parents considered buying a bigger house with a grannie suite, so both grandmothers could live with the family. This time they did look at houses in Westmount. My maternal grandmother lived with us for a short while but in the end, we didn’t need to move as both grandmothers died in 1967.

My mother continued to live in the house after my father died. She went into a residence in NDG in 2011 where she died in 2017 and never moved back to Westmount.

This Sunday was mother’s Day  and May 11, 2020, would have been my mother’s 98th birthday so I posted this story as a remembrance of her.

My mother’s story of serving as a Wren https://wordpress.com/block-editor/post/genealogyensemble.com/4470

Personal recollections by Dorothy and Donald Sutherland told to the author.

One house in Pointe-Claire had a large closet with sliding doors in the upstairs hall where two little girls put their dolls during the visit and forgot them. The agent returned to look for them but they were gone and never seen again.

2 thoughts on “Living in Westmount”