Who was my third grandmother? Which one of these women married Moyse Hypolite  Fortin? Were they cousins? Were there mistakes in the information I was finding? I needed answers.

Genealogy requires exact details and facts in order to get the story right. As a new genealogist I learned this very quickly.

The two communities are very close to one another, a matter of only a few kilometers.

It soon became apparent that there were in fact two Henriettes. I found the baptismal  document on line for Henriette 2. The discovery made me realize that perhaps I had been researching the wrong person.

At this point I needed clarification. I made a visit to Centre d’histoire La Presqu’íle in Vaudreuil and was able with the help of the archivist learn for certain which of the Henriettes was the correct one. Now I had what appeared to be a monumental task ahead. Research had  been done for Henriette 1 thinking she was the right person.  Now, this lineage was of little value as she was not one of my ancestors. This meant  starting over with Henriette 2 and tracing her line.

The archivist was very helpful finding documentation and pointing out the right direction to proceed.

This was indeed a valuable lesson and I am grateful having  learned it early on in my research. It has constantly been a reminder that before making the next move, make certain you have as many exact verified facts as possible  about the particular person you are researching. That way you can avoid  mistakes.

The following two documents were found on Ancestry-Drouin Collection 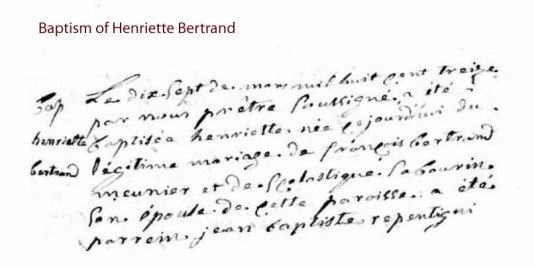 Comparison of data for the two Henriettes

In 1832 Henriette  2   married Moyse Hypolite Fortin, my third great grandfather. She died November 5, 1838 at the age of twenty-five  in Montebello,  having given him a daughter, Leocadie Fortin, my great-grandmother and a son, Louis.

2 thoughts on “The Pitfalls of a Neophyte Genealogist”