Shortly before graduation from medical school at Queens University in Kingston, Ontario in 1883, William G. Anglin (my great grandfather) and a few fellow medical students attended the performance of a “thought-reader”, English mentalist Stuart Cumberland[1]. So impressed with what they had seen, they went back to their place and tried one of the simpler experiments.

The operator was blindfolded, and the Medium, placing the back of the fingers of one hand on the operator’s forehead was to think intently as to what was required to be done. For instance – pick up an article from some position and place it in another position – the operator having previously gone out of the room while the experiment was being agreed upon. Everyone singly failed, and I was the last one to try. Immediately I went across the room and picked up a small object from the mantelpiece – crossed the room and placed it on the middle of a chair. Tore off the handkerchief from my eyes and said: “That’s what you wanted done”. “By George, you’re right, Anglin, we will try you again”, and I did correctly five or six other experiments – each a little more difficult than the last. Could not account for the success, but in every experiment I was conscious that I was doing the right thing. When my fingers touched the desired object, I closed on it with a feeling of certainty.[2]

The next week William left for Halifax to sail for Liverpool to continue his medical studies in England. He met a fellow doctor and, eventually the conversation turned to “thought-reading”.

It proved to be a very entertaining voyage for the passengers, as he successfully performed time and time again. A passenger would say – “Well, Doctor, I hid a pin somewhere on the ship – an hour ago” and blindfolded, William would take the passenger’s right hand and, holding the fingers to his forehead, he would say, “Think where it is”, and they would start upstairs and downstairs, and along corridors to the spot, and he would pick up the pin from a curtain or a chair wherever it had been placed.[3]

Later in life, his son Douglas, referring to his father’s diary, lamented “End of Diary – too bad – I wish we could have heard about my father’s time studying in London and Edinburgh, where he was entertained at many high society places on account of his thought-reading.”[4]

Following his medical degree from Queen’s in 1883, William spent eighteen months as the house surgeon at the Royal Infirmary, the Sick Children’s Hospital, and the Royal Maternity Hospital in England. Then he successfully completed the M.R.C.S. exam (Member of the Royal College of Surgeons) in England.

When he returned to Kingston, in the fall of 1885, he lectured for a session in surgery at the Women’s Medical College. A year later, he became Professor of Pathology and finally head of the department of Clinical Surgery.

Around that time, William built an addition to his parents’ home at 52 Earl Street in Kingston, which provided him with both office and home.

This is where he brought his childhood sweetheart and bride, Harriet (Hattie) Eva Gould, in 1886. The name ‘Dr. Anglin’ remains embossed in the upper portion of the glass of the front window to this day.[5]

He remained a member of the Medical Staff at Queen’s until May 1915 when he departed with the Queen’s Stationary Hospital for Cairo, at age 59. 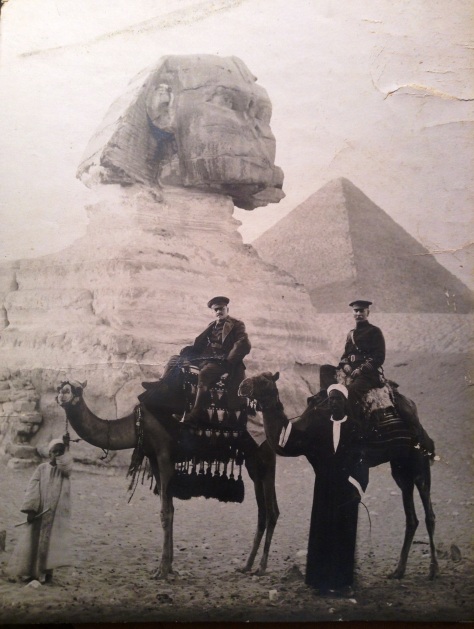 He served as a civil-surgeon with the rank of Lieutenant Colonel until 1916 when he became ill with Malta fever and phlebitis. He was given a medical discharge and sent back home.

William’s attestation papers, dated May 1st 1915, declared that he was fit for duty but noted a missing middle finger on his right hand.  In 1904, it was reported that Dr. William G. Anglin was severely ill, and lost a finger due to this illness. There was much relief when it was announced that he would live.[6]

The story told was that by using his “thought-reading” skills, he was able to physically draw down the infection in his right arm to his middle finger. The amputation of that one finger removed all traces of infection from his body probably saving his life… and enabling him to continue his work as a surgeon.[7]

[7] As told to Lucy Anglin from Thomas Gill Anglin, grandson of W.G. Anglin, who read his grandfather’s diary

One thought on “Surgeon and Mentalist”