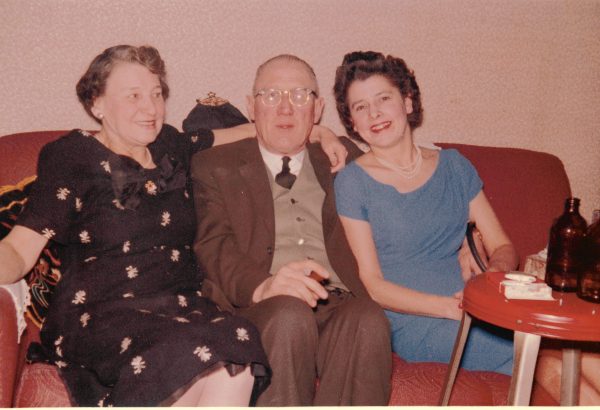 I never asked my great granny Charlotte about her wedding, but the records I’ve found hint at lots of intrigue.

Did they plan a summer wedding and then rush things to avoid conscription? Had they initially hoped to marry in the church next to her home but lost the opportunity due to community infighting?

Probably, but not yet proven.

What I do know is that my great grandparents—then 23-year-old groom Arthur Johnson and his 22-year-old bride Charlotte Charbonneau—chose to marry on Friday, February 9, 1917 in an unfinished church basement blocks away from her home instead of in the church right next door.

The direct information I have about that day appears in an affidavit filled out by Arthur on January 22, signed by the witnesses and solemniser, and turned in to the Registrar on February 17.[1]

When looking at it, I couldn’t help wondering two things: why then and why there?

She wasn’t pregnant—their first son wouldn’t be born for another two years.

Money would be tight later, but at that point both had jobs. Arthur worked as a machinist and Charlotte served as a fore-lady, probably supervising women at a factory producing something for the war.

Did the impetus to marry early in 2017 have something to do with federal government musings about conscription at that time? Prime Minister Robert Borden promised publicly that he’d send 500,000 Canadian soldiers to Europe by the end of 1916. Only 300,000 men volunteered by December 2016, and numbers dwindled as horrific details about the Battle of the Somme reached Canada.

Borden passed conscription in August the summer after Arthur and Charlotte wed. Had they married after July 6, 2017, Arthur might have been conscripted. I might not exist.

I’m not sure why Arthur didn’t serve. He certainly had close ties with Europe having immigrated to Canada from Lancashire England ten years earlier. He came to Canada with his brother Albert and his parents, Mary Young and William Johnson.

Neither Arthur nor Albert volunteered for the Armed Forces and the family remained close. Albert and his wife Amie served as witnesses at Arthur and Charlotte’s wedding.

I also wonder how they selected the location of their marriage.

Both families worshipped in the Presbyterian faith. At the time, Charlotte still lived with her parents on Cross Street in Weston, right next to a Presbyterian Church called the Old Kirk at 11 Cross Street.

Why didn’t the couple get married in the Old Kirk?

Turns out that the building couldn’t offer a legally-sanctioned marriage between March 2013 and June 2017, despite more than 200 of the 247 congregation members working hard to keep the place open.

The problem began in March 2013, when fewer than 38 people voted to close the facilities and sell the Cross Street building. Given that the snow kept 209 people at home that day, I suspect that the meeting in question took place in the Main Street building purchased for Sunday School services a year earlier.

The sordid affair appears in a wonderful history of the Church in Weston called “From Then to Now.”

At a congregational meeting in March 1913, bad weather kept attendance to 38 out of 245 members. A majority of the 38 voted to hold all future services at the new facility and to sell the Cross Street site. Westminster Presbyterian Church was then fully established on the new site and the Cross Street site was sold.

The church on Cross Street was then re-purchased by some of the old members and services resumed on January 18th, 1914. Presbytery refused to recognize this congregation though, so it operated as an independent Presbyterian Church known as The Old Kirk The group continued to worship steadfastly and endured three failed petitions to Toronto Presbytery asking to be recognized as a second Presbyterian congregation in Weston (one petition was signed by 259 members). They appealed to the General Assembly, held in Montreal in June 1917, and the appeal was sustained. The church was then named The Old Presbyterian Church. From June 1917 to 1925 there were two official Presbyterian Churches in Weston.

I haven’t yet found definitive proof that Charlotte and her family took part in the purchase or petitions of the Cross Street building. Given that Arthur and Charlotte married within a completely different congregation, however, it’s likely that they did.

Perhaps the couple hoped to be the first marriage in the renewed building, but then chose to wed rapidly so Arthur could avoid conscription. They needed a legally-sanctioned marriage.

Arthur’s affidavit provides the address. It indicates that Reverend Charles A. Mustard presided over Charlotte and Arthur’s wedding ceremony at 38 Harvie Avenue, a building at the corner of St. Clair Avenue.

Information contained within a Presbyterian Museum article[3] about the Church after it was torn down in 1999 gives context. The St. David’s Church congregation purchasing the Harvie site in 1911. They began operations by moving an original frame church from the south side of St. Clair Avenue opposite McRoberts to the new site. That building opened in 1912.

The community grew rapidly. By 1914, they hired Toronto architect Herbert George Paul to incorporate their original wood frame structure into a new larger building. He finished constructing only the basement, however, when the bank pulled the Church loan due to World War I.

A speech by John Barron in June 1918 describes what happened.

In the year 1911 the present site was secured. Seventy-two feet of the frontage being presented by Westminster Church, to which the Church building was moved and alterations made. This building was opened on Nov. 12, 1912.

The congregation outgrew this accommodation, and in the year 1914 plans were prepared and the present building was commenced, but owing to conditions brought about by the war, the basement only was finished and used for services to the present time.

So, instead of getting married in a perfectly good building on Charlotte’s street, community infighting and a war forced the couple to wed in an unfinished basement in St. David’s Presbyterian Church.

[2] From Then to Now, 1847 to 2007, a history by the Weston Presbyterian Congregation, http://westonpresbyterian.ca/wp-content/uploads/2016/04/WestonPCHistory.pdf