My grandmother was seventy-one, barely five feet, less than ninety pounds, and very frail. She lay propped up with pillows as family hovered around her hospital bed. Her eyes were rimmed with purple with the bruise spreading down across her cheeks. Her arm was in a cast and her smashed glasses had not yet been replaced. At nine years old, I could only stand and stare in horror.

I’m sure the mugger had thought Jean was an easy mark – a quick shove, grab the purse and run. But the mugger didn’t know my grandmother. She had fought for years to keep food on the table and she was not going to relinquish her grocery money without a fight.

My grandmother was born Jean Jamison Brodie (1884-1971 , the daughter of wealthy Quebec City flour merchant. She was sickly as a child and, strangely, given into the care of her mother’s spinster sister. In 1902, Jean trained as a teacher at MacDonald College in Montreal. Controlling students bigger than she was proved to be too strenuous and she gave up teaching after only a year.

Their home was a spacious flat on Fraser Street. Jean’s aunt moved in with them, the boys grew, and the book store prospered. All was comfortable until the stock-market crash of 1929, the year the two oldest boys graduated from high school. James struggled to keep the bookstore afloat, adding a branch store in a more affluent part of town to attract new customers. He downsized his family’s living quarters. Colin and Oswald found jobs and contributed to the household finances. Jean learned to be very frugal. She walked miles to save five cents on a bunch of carrots. My father Ian claimed his mother could create a dinner with five chicken wings and make it look like a feast.

In 1935, the inevitable occurred. Both bookstores were lost. My grandfather joined the ranks of the unemployed.  But not my grandmother!  One would think, given her frailty, she would simply collapse from the weight of the stress. Instead, the desperate situation seemed t 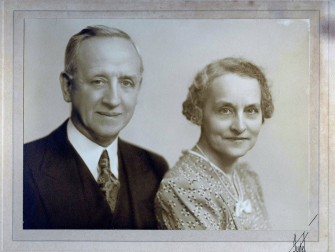 o galvanize her strength.  She collected the books from the bankrupt stores and set about running a lending library from her home.

It was not easy for Jean to deal with the public – she was a  private person and the family’s financial downfall was very humiliating. How difficult it must have been for her to collect dues, particularly late payments, and suffer petty complaints from  customers who, once her equal, now looked down on her as merely a sales clerk. But she had a family to feed and so she persevered.

Twenty years later, in 1955, Jean was mugged on the way to the grocery store. By then, my grandfather had found employment, the children were grown and had children of their own. Jean no longer had to worry about money for the next meal. Still she refused to give up her purse. Never would she allow herself to become a victim.