The recent McGill graduate and qualified Associate of the American Guild of Organists in New York City cautiously approached his father, in 1908, with his dream to enter the priesthood.  His father, a stockbroker, answered simply: “Not much money in it!”  But there was no doubt Sydenham Bagg Lindsay had a vocation.

He served in various parishes in the Montreal area including St. John the Evangelist where he met his wife, Millicent Thorpe Hanington, daughter of Dr. James Peters Hanington.  They were married in 1918 at the height of the flu epidemic when only thirty guests were allowed in the church!

Soon after that, he became Assistant Priest at St. Matthews, Quebec City, then Trinity Church in Beauharnois.  Two years later he was given his first parish – St. Mark’s in Valleyfield.  He continued with his ministry all over the Diocese of Montreal and some of his parishes included St. Aidan’s in Ville Emard and St. Simon’s in St. Henri. Finally in 1940, he became the rector of the Church of the Advent on Wood Avenue, in Westmount.

During the depression, when he was at St. Simon’s in the slums of Montreal, not only did  it take real ingenuity to produce the Christmas pageant without any money but the confirmation veils were stolen just a few minutes before the Bishop arrived![1]

World War II brought an end to the depression, but also, alas, an end to the lives of some of his parishioners.  His daughter, Mary Kerr, recalled that “many a bereaved parent, spouse or friend told us what a help my father was in their time of sorrow.”[2]

As rector of the Church of the Advent, he built up the parish and the boys’ choir which became quite famous and drew a large congregation.  It was a great thrill for him.

In his “spare” time, Sydenham was a classics scholar and church historian and kept up a correspondence with people all around the world, including missionaries and the fellowship in Western Canada.  He also regularly contributed to the “Letters to the Editor” column in the newspaper writing “no more than three or four sentences but always to the point, saying all that need be said in a few words”[3].

He also wrote and published the following four books:  A Historical Sketch of St. Columba’s Parish, Montreal, The Church of England and the Reformation (A Lecture Delivered in the Diocesan College, Montreal, on the 10th March 1954), Bishops of the Lindsay Clan (1957) and The Three Hours’ Vigil (1965).

In 1950, he was made an honorary Canon of Christ Church Cathedral   His health began to fail in 1953 and he retired as Rector of the Church of the Advent.  He stayed on as assistant priest, happily and humbly helping his successor. There may not have been “much money” in his calling but his “golden” jubilee in the ministry was celebrated in style in 1960. I was only three years old at the time.

I, however, remember him fondly as my Grampa-Lin, quietly joining in the family get-togethers.  He loved his grandchildren and amused us in his special way.  When pouring out drinks at family dinners, he would ask us: “Would you like ginger ale or Adam’s ale?” – Adam’s ale being water, of course! 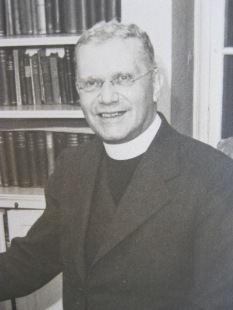