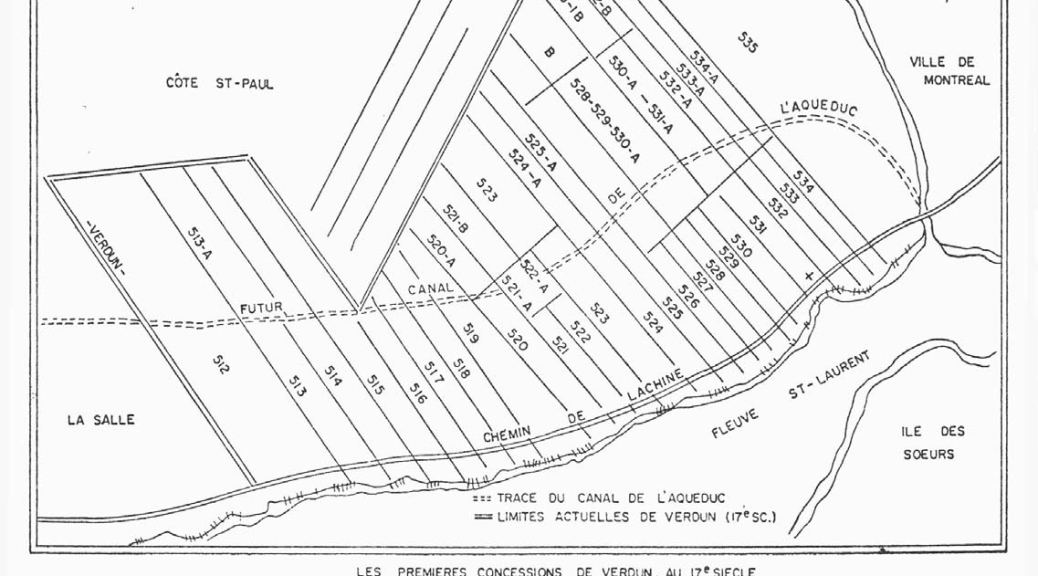 Imagine my surprise to discover that my ancestors lived in my neighbourhood more than three hundred years ago.

At that time, Verdun’s Crawford Park was a very different place than it is today. Today, the neighbourhood encompasses about 1000 people in about 20 city blocks between the St. Lawrence River to the aquaduct in the north and between the Douglas Research Institute and the borough of LaSalle to the west. In 2006, more than 20,000 people lived here.

When my ancestor Étiennette Alton lived here, however, the neighbourhood was known as the fief de Verdun and it extended further north through Angrignon Park and the St. Jacques Escarpment.

She moved here after marrying her second husband, Barthélémy Vinet dit La Reinte on Monday, June 13, 1672. She already had three sons and a daughter from her first marriage. Her fifth child, their first son, Martin was born a little later the same year.

The family were among 83 families in the neighbourhood, according to the 1681 census.

The couple had five more children in the following fifteen years. They could afford them. Her husband worked for Sieur Jean-Baptiste Migeon de Branssat, an attorney and later judge with the manor of Montréal.

At that time most men—including Vinet, Migeon, and Montreal Governor Francois-Marie Perrot—earned significant portions of their income from hunting and selling furs. The market for furs, however, was diminishing.

In 1676, a new law forced fur traders to obtain licences, although few bothered to do so.

A year later, Migeon was appointed judge and asked to create a public inquiry into the fur trade industry. During that inquiry, he discovered that most elite, including the Governor himself, were illegally involved in the fur trade. The Governor responded by accusing Migeon of breaking the same laws and putting him under house arrest to halt the inquiry before its results could be known.