Elizabeth Mowat is my great great grandmother. I didn’t even know her name before I began my genealogy quest. I still don’t know much about her but I now have a photograph, a portrait of her in her “go to church clothes” with the requisite black bonnet.

There were no pictures of her in the box that started my family history search, although there was a family photograph of her husband William, her son Donald, his wife Alice and three of their children, William, Mary and James Dickson. I originally thought Elizabeth was alive at the time, so why on such an occasion was she not with them at the photographers? It later turned out she died in 1883 and not the assumed 1888.

It was through the internet and RootsWeb that I finally saw her face. Robert Harkness, from her daughter-in-law Alice’s line, said his family had lost all their old photos and information in a house fire but his uncle might know some family history. I wrote to his uncle, Bruce Harkness but did not hear anything. Then a couple of months later I received a letter from a George Dickson with photos and stories. He was also a relative of Alice’s and lived in the same apartment building as Bruce, in Belmore, Ontario. Bruce had shared my letter and it was George who responded. In the package was a picture of Elizabeth.

She was born in 1829 in Pulteneytown, Caithness, Scotland. Her parents were James Mowat and Isabelle Houston. It doesn’t appear that she had any siblings or at least any that survived to the 1841 census.

She married William Sutherland a shoemaker and 13 years her senior, May 1845, in Pulteneytown and they set out for Canada soon after. They sailed with two of William’s nephews and their wives so he had some family with him, but Elizabeth left her family and her life, never to see them again. There are Sutherland letters that have survived which reported on all the neighbours and friends so I assume the Mowats also heard about their daughter’s new life and family.

Elizabeth and William had seven children, William, James, Donald, Christina, Isabella, George, and John. They moved from Toronto to West Gwillimbury and finally to their own land in Carrick, Bruce County Ontario. After clearing the land and farming for a number of years they gave up the hard work and moved back to Toronto.

Elizabeth died in 1883 and William died in 1887. My sister Jeannie and I visited Mount Pleasant Cemetery and found their tombstone. The names were readable but not the inscription. As Jeannie went to the car to get some paper to try a rubbing, the sun came out and it’s angle made the inscription jump out,“The dead in Christ shall rise first”.

“The dead in Christ shall rise first.” 1 Thessalonians 4:16

The story of Elizabeth’s daughter Christina can be found at:   https://wordpress.com/post/genealogyensemble.com/2743

On a November morning in 1920, Christina Sutherland was hit by a car. She was hurrying along King Street in Toronto and stepped out from between two wagons into the path of the vehicle. The driver, Joseph Stern, couldn’t stop in time and knocked her down. Extremely upset, he picked up her unconscious body, placed her in his car and rushed her to the Toronto General Hospital.

Christina died the next day of a fractured skull and brain concussion. The circumstance of Christina’s death, written up in the Toronto Star was the most noteworthy event in her life.

Mr Stern reported the accident to the Court Street police station. He wasn’t detained after he explained what had happened. Christina’s death was the third one in six days caused by a motor car.

As late as 1910 pedestrians still had the right of the road. The streets were busy with automobiles and horse drawn wagons but people crossed where ever they pleased, with hardly a look. Toronto police began directing traffic in 1918 as yielding the right of way at intersections didn’t work any more. By 1920 Toronto had a population of 500,000 and cars were becoming more and more popular. Police now claimed that most accidents were the fault of the pedestrians and jaywalking became a word.

Little else is known about Christina. The only mention of her is in her nephew William Harkness Sutherland’s diary and that too is about her death. “ Received a special delivery letter from Wilson this morning just as we were starting out to church giving news of Aunt Christina’s death.” There weren’t any photographs of her, she isn’t mentioned in any surviving family letters and the record of her birth hasn’t been found.

She was born in Ontario around 1854, the fourth child of William Sutherland and Elizabeth Mowat. They followed the Scottish naming pattern and so she was named for William’s mother. William purchased crown land in 1855 in Carrick, Bruce County, Ontario. The land had to be cleared, a house built and crops planted, so there was always a lot of work to be done as Christina grew up. All the Sutherland children went to S.S. #9 Carrick. The school, built of hand-hewn logs by the original settlers was opened in 1859. Parents had to supply half a cord of wood for each child attending. Christina continued to live at home at least until she was seventeen.

In 1881 she was living in Toronto and working as a domestic for William Johnston, his wife Mary and their two children. He was her aunt Jessie Sutherland’s brother. Some of Christina’s brothers had also moved to Toronto at this time, but she wasn’t living with any of them.

She wasn’t found on another census until 1911 when she was a lodger at 381 King St West. This appeared to be a boarding house owned by an Alice Dawson, who lived there with her daughter and grandchildren. There were ten lodgers on the census; four women and six men. Christina was listed as an operator at a factory, working 48 hours a week with a two week holiday and all for three hundred dollars a year. She must have had an independent streak as she worked to support herself and still wasn’t living with any family members.

She never married and was reported to be 66 at the time of her death. She was still living on King Street, although at number 391. There was contact with her family as it was her brother George Sutherland who was the informant of her death and her funeral was from her sister Isabella’s house.

Christina was buried in Mount Pleasant cemetery in a plot with her parents, two young nephews and a niece. Even there she didn’t leave a mark, as her name is not on the tombstone.

Sutherland, William Harkness. Diary from January 1920 to December 1924. In possession of the author.

The story of Christina’s mother Elizabeth Mowat can be found at https://wordpress.com/post/genealogyensemble.com/3293 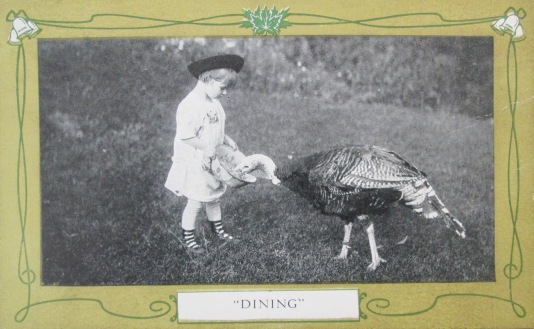 The mention of Thanksgiving or Christmas always brings up thoughts and smells of roasting turkey with stuffing, mashed potatoes covered with gravy, turnips, bright red cranberry sauce and fizzy cranberry drink with ginger-ale. There are also the family hors d’oeuvres; crackers, often Ritz, with cheese and an olive slice or just an anchovy. This is our traditional holiday dinner and apparently my ancestors also enjoyed turkey.

I am lucky to have a few letters written by my great grandparents, Donald and Alice Sutherland and funnily enough, most of them mentioned turkeys. They might have raised turkeys at one time, on their farm in Bruce County. William Sutherland obtained crown land in Carrick, Ontario in 1855. He and his family cleared the land and began farming but they later realized that farming wasn’t in their blood. Donald and some of his siblings had left for Toronto before William sold the farm in 1876 to his son William. Even this William preferred the big city and by 1879 the farm was sold again and all the Sutherlands were living in Toronto. They  still had ties to the country as many cousins remained farmers in Bruce County. Although they preferred urban life, it seems they would rather have farm fresh produce on their table.

The first note written by Donald on January 6, 1899 said, “We received the butter and turkeys alright. They are very nice. We will forward the amount next week.”

On December 17th 1900, Donald writes a long letter about his trip to Scotland and London and in closing says, “I want to know if you can send us three or four good fat turkies for Christmas. If you can please ship them by express early on Saturday before Christmas and I think we will get them on Monday, address to store 288 Yonge Street. We will give whatever price is going.” One can just picture a crate of gobbling turkeys in the middle of the book store. Mail service must have been very reliable at the time! There was no haggling over the price.

The third letter was written by his wife Alice, December 19, 1901. Christmas was again approaching and and she wanted to know, “well what about turkeys if you have any to sell you might send us three or four, they were fine last year, if you have none to sell let us know as soon as you can.” She continues giving a little news about other family members and closes with“hoping you can let us have some turkey I remain your cousin Alice.” It seemed late to place a turkey order but they probably received them.

There was another letter in Carol’s book and of course it also mentioned turkeys. January 7, 1904, “Dear Cousins, I must apologize for delay in answering. The Turkeys came alright and was very acceptable. Thanks for same. We weighed the two largest ones but the smaller one was missed however as the two weighed 9 lbs each and the other not any more we will reckon 27 lbs @ 12 c = $3.24. You will find enclosed a P.O. Order for $3.25 to cover the three turkeys. If you have any more left and could send us other three we could use them. We never get beat eating Turkey although a little more expensive than ordinary meat yet they are good.”

When I received copies of the letters, I sent them on to my siblings. We all had a good laugh and this prompted, in many subsequent emails the mention of turkeys in every way shape and form. We thought these letters were really funny and have continued telling turkey jokes. It’s only a little thing but they bring the ancestors to life.