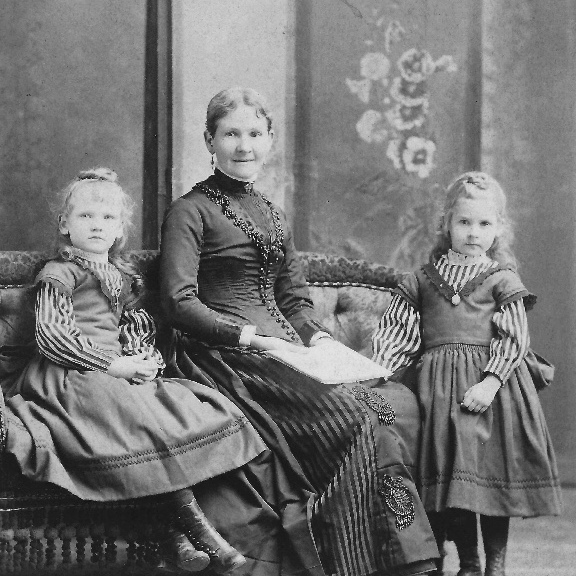 A collection of letters that William Sutherland wrote to Minnie Eagle before their marriage has survived. They carried on a long-distance relationship. She was living in Toronto with her mother and sister while William had moved to Montreal for an engineering job with Montreal Water and Power. I do wonder what happened to Minnie’s letters to William. He kept them initially and reread them, “five and six times,” as he often referred to her previous letters. Did Minnie not want her private thoughts around after they were married?

They are very sweet letters showing the developing love between two people and the preparations for a life together. William and Minnie met at Cooke’s Presbyterian Church in Toronto in the early 1900’s. This was the church both their families attended.

William was immediately smitten but Minnie took coaxing. He was thrilled when Minnie finally agreed to marry him. “There was one line in your letter, Minnie that did me more good than all the rest put together and that is saying a good deal. It was “I don’t think I want to wait so long.” These little phrases dropped now and again are the strongest assurances that you are now looking forward to being with me as I have been so long to being with you.”

How often did he ask? His parents thought highly of her. His father, a man of few words said, “ You should marry that girl right away.” His mother was his confidant.

Their September 1907 wedding was almost immediately called off, as Will went out to a tavern with his work colleagues. Minnie was part of the temperance movement and totally against alcohol. “I am rather astonished that you felt so deeply about that little question about going into the bars. But you need have no worry on that score. My position is so well known among the boys here, that not one of them ever think of asking me to have a real drink.”

Will was full of plans for their life. He and a friend Mr Schwartz owned a couple of lots in Outremont and were designing semi-detached houses they hoped to build. He sent his drawings to Minnie asking for her opinion. “One objection to this plan was the big kitchen. Some people think that it makes more work but Mrs Schwartz says, the bigger the better.” The houses were never built. “Our house building plans may fall through as there is very persistent talk of the company selling to the city and if they do I don’t know whether I would stay in Montreal or not.” The Montreal Water and Power company was later sold to the city but William did stay. He and Clare Dryden started a plumbing company.

There was some talk about how soon they should be married. He wondered if she thought she should learn to cook and keep a house first or should they learn together. “The greatest pleasure we get in this life is planning and arranging and looking forward and this I think we ought to do together. We are in the formative period of our lives now and I think we should be together. We have much to learn from each other and much to unlearn if we are to live smoothly and happily in each others company.” I don’t think she ever learned to cook well.

Their wedding was postponed from the fall to the summer and then to the next year. Minnie was in hospital April of 1908. He didn’t immediately know she was ill. “Your consideration of me is so characteristic of your own dear self and I love you for it. I should have been terribly anxious if I had known.” He didn’t rush off to Toronto to see her but her mother kept him informed about her progress. He even waited to send flowers as she already had 12 bouquets! 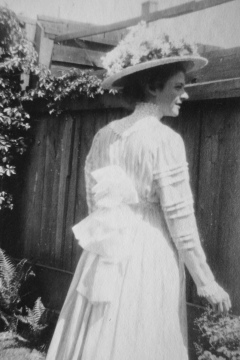 Minnie in her Wedding Dress 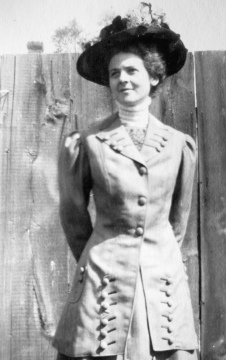 Minnie in her Going Away Outfit

Further wedding plans didn’t go smoothly as there was a problem with her sister Amy. Exactly what, was never stated but Amy was upset that Minnie was to be married and move away. They both worked at Ryrie Bros. Jewellers but neither worked after the wedding. Will sometimes stayed away while they tried to bring Amy around. “I understand the situation all right little girl; a visit to Toronto would be rather a failure under present circumstances and I am more than tickled to think that you look at it that way also.”

The wedding finally took place June 02, 1909. They had a honeymoon trip up the Saguenay River and then moved into an upper duplex on Chomedy Street in Montreal. A friend of Will’s was going to have a border to save expenses but that was not what he wanted. “If it took half my salary for rent I would have you all to myself and nobody else around, for the first year anyway. Yours as ever with best love, Billy”

Letters from William Sutherland to Minnie Eagle, 69 Seaton Street, Toronto, Ontario. From September 10, 1907, to February 16, 1909. In the possession of the author. 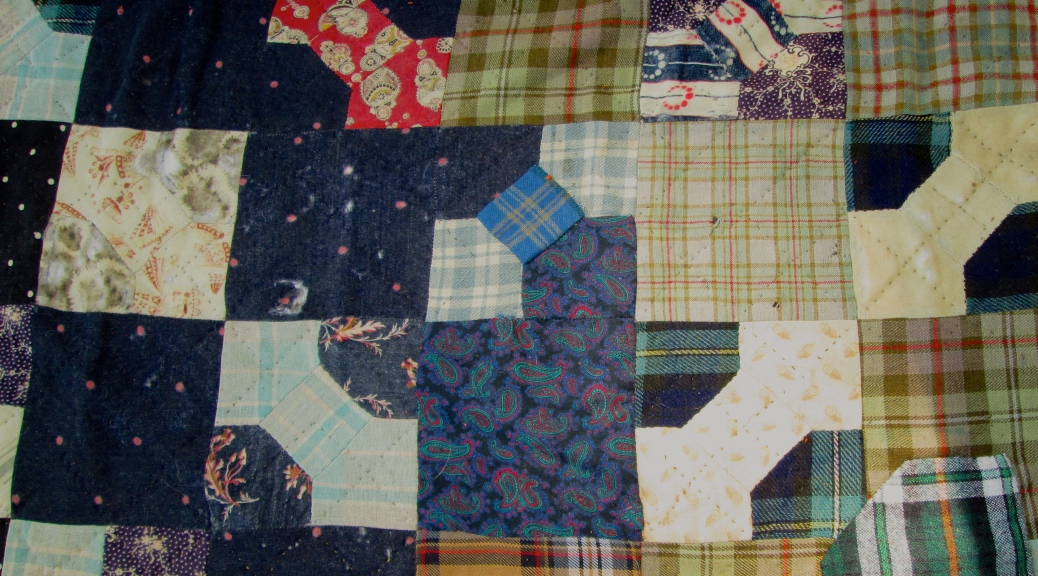 I have a sampler made by Susan Dodds Bailey, my two times great-grandmother, but much more has survived made by her daughter Eliza Jane. My favourite item is a wool quilt. 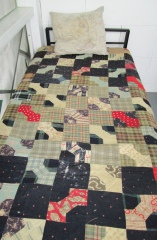 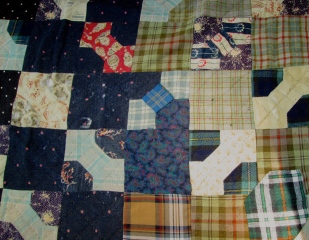 The quilt is a traditional bow tie pattern, made from scraps of suiting and other old clothes. Reds, blues and greens in plains, plaids and a few polka dots march across the front. It was all hand stitched. For many years, it was put away in a closet but now summer has it spread out on the day bed, on the verandah of our country cottage. Many an afternoon nap has been taken on it. The quilt had begun to show wear, especially the disintegration of the black dyed fabric but it was being used and loved. Last fall, before Thanksgiving, the quilt was left on the bed. Mice climbed under the tarpaulin protecting it, decided wool would make a great nest and chewed the fabric. It needed to be repaired. Great grandmother would not be happy.

Eliza Jane wasn’t just a quilter, she also knit and made a finely worked afghan. This was a work of love made from off white wool purchased especially for the project. It was given to her daughter Minnie. Elisa Jane was very upset to see that her daughter used it folded up under a mattress, to raise the head of a bed. It was the only time her granddaughter Beth remembered seeing her grandmother cry. The afghan then went to Beth and later her great-granddaughter Dorothy, who proudly displayed it on her guest bed. Great grandmother would be happy.

Eliza Jane also did a lot of fancy needlework. Needlepoint book marks, crocheted towels and lace, crossed stitched sayings on paper and tatted edging have all been preserved. She loved listening to the radio,“Wilson came over on Wed evening and looked over our machine it needs a new long battery but I heard a fine concert in Masonic Hall last night the best yet after the shaking up he gave the old battery.” I can picture her sitting listening in the evening, her hands never idle. 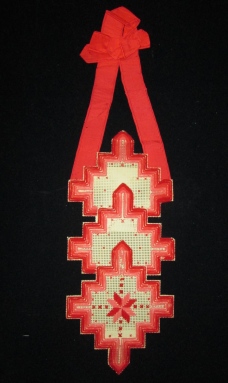 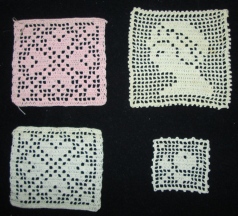 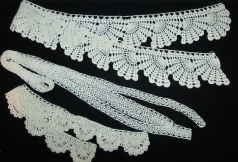 Eliza married William Eagle in 1881, when they were both considered “older”. He had been looking after his mother and didn’t want his wife to become a nurse. They did marry before Martha McClelland Eagle died, as they couldn’t wait forever. Eliza’s wedding dress was a burgundy silk because she thought cream or white wasn’t suitable for a woman then 36 years of age. I don’t know if she made the dress but it was kept for many years and worn for dress up by her daughters and granddaughters. 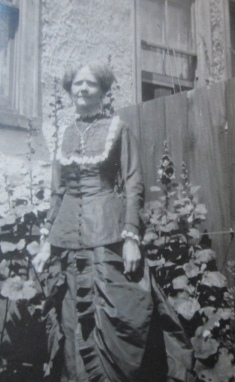 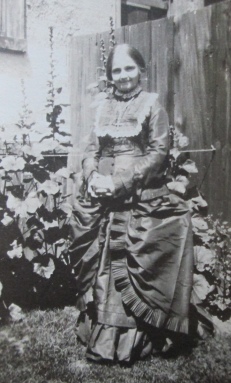 Neither her daughters nor her granddaughters were much for sewing or handiwork. My grandmother, Minnie could do some mending and darn her stockings but she was never into fine sewing. She had a dressmaker come to her house twice a year to make her clothes. Her sister Amy tried to do some sewing but for her it was a task, not something she enjoyed. So, I think Eliza Jane would be pleased to know that some of her great granddaughters do a lot of needle work and appreciate her craft.

With some old fabric saved from my mother’s hall closet, I repaired the major holes in the wool quilt. This summer it was back on the day bed. I think Great Grandmother would be happy.

Notes written by Minnie Eagle Sutherland,“Mother made these fancy articles” and Amy Eagle.

Articles in the possession of the author