I have always been fascinated by the carved images found on early American gravestones. Imagine how thrilling it was to discover that this kind of tombstone marked the final resting place of one of my colonial New England ancestors in Westfield, Massachusetts. I found it when I visited Westfield’s Old Burying Ground a few years ago, en route to the New England Regional Genealogical Conference which was being held in nearby Springfield.

Westfield was founded in 1669. The oldest known gravestone in the burying ground is that of Abigail Noble, who died in 1683. Childbirth, consumption, dysentery, smallpox and accidents were common causes of death, but a surprisingly large number of those interred here lived to more than 80 years of age.

Among the more than 1100 gravestones and several hundred more unmarked graves in this cemetery, I was looking for the resting places of three of my direct ancestors: my six-times great-grandfather Daniel Bagg, his father-in-law, Isaac Phelps, and his son’s father-in-law, Consider Moseley. I found them in the southeast section of the cemetery where many of the oldest plots are located.1

My first stop was the Athenaeum (the public library) to pick up the key to the cemetery. From there, it was a short walk to what is known as the Mechanic Street Cemetery. Set back from street between two houses, the wrought iron gate was a bit hard to find, but once I entered the cemetery, I was amazed at how large it is, and how well cared for. This old burying ground, which is included in the U.S. National List of Historic Places, was carefully weeded and mowed, protected by a fence and shaded by mature trees. The historic tombstones have been cleaned over the years, and local citizens are trying to find the funds to better preserve them..2 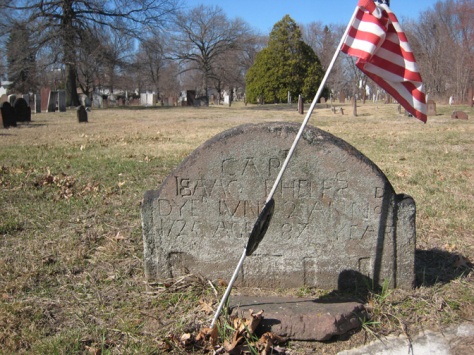 The grave of Captain Isaac Phelps (1638-1725) was easiest to find because there was a small American flag next to it. Carved in capital letters on his gravestone are, the words, “Capt. Isaac Phelps Anno 1725  age 87 year.” Westfield lay at the western edge of the Massachusetts Bay Colony and the tiny settlement was vulnerable to attack from American Indians, so Isaac probably played a role in protecting the community, and a military title to acknowledge that contribution.

Born in Windsor, Connecticut to George Phelps and Philura Randall, Isaac Phelps married Ann Gaylord around 1663 and moved his family to Westfield around 1670. Isaac carried out many civic duties in Westfield over the years: he was town clerk, assessor, surveyor, town treasurer and schoolmaster.3

Isaac and Ann had 11 children, four of whom died young.4 He and Ann were my seven-times times great-grandparents through daughter Hannah, who married Daniel Bagg (1668-1738).

Lieut. Consider Moseley’s red sandstone tombstone, with a carved face, crown and wings symbolizing everlasting life, was close to Isaac’s.5 Consider (1675-1755) was the fifth of 10 children of John Maudsley (the name was spelled various ways) and Mary Newberry. The Maudsley/Moseley family moved from Windsor to Westfield around the time of Consider’s birth. In 1709, when Consider was 34 years old, he married Elizabeth Bancroft. They had eight children, including twins Elizabeth and Daniel, born in 1714. After his first wife died, Consider married widow Rebecca Dewey. His daughter Elizabeth married David Bagg, the son of Daniel Bagg and Hannah Phelps, in 1739.

According to a history of Westfield, Lieut. Consider Moseley was “one of the wealthiest and most influential men of the town,” however, I have found few details of his life.6 He died on Sept. 12, 1755, age 80. 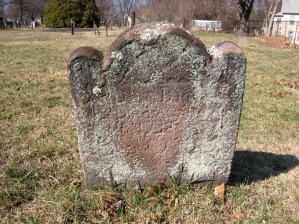 The grave of Daniel Bagg was more difficult to identify. The stone that I suspect marks his grave is almost illegible. The other problem is that there are three individuals named Daniel Bagg buried in this cemetery. The Daniel Bagg I was seeking was the son of John Bagg and Hannah Burt of Springfield. Many of Springfield’s younger residents moved to Westfield. Daniel became a farmer in the Little River area of Westfield. He and his wife Hannah Phelps had 10 children, and their son David and his wife Elizabeth Moseley were my direct ancestors.

Ann Gaylord, Elizabeth Bancroft, Hannah Phelps and Elizabeth Moseley are also likely buried in the Old Burying Ground, but their graves are not marked.

All photos by Janice Hamilton

This article is also posted on https://writinguptheancestors.blogspot.ca

One thought on “A Visit to the Old Burying Ground of Westfield, MA”