So, just who was the mystery man who sent my Gran a postcard in 1915?  For many years, I have held in a box of family history memorabilia a small item – a postcard.

Life, (bringing up children, and work), prevented me from finding out more about this postcard before now- sent by a stranger to my Gran who, born in 1900 was just 15 years old.  Who was this mystery man, I wondered? Now, in the second year of the COVID-19 pandemic, I have no excuse and plenty of lockdown time.

I had often looked at this flimsy piece of history over the years and wondered… And so, at last, I started my research into Pvt. John Harold Polfrey.

As it happens, all the information I needed was on the postcard that my maternal Gran, Edith Bevan had received  106 years ago.

World War 1 was in its second year and during this  ‘War to end all Wars’ citizens, even children, were asked to send to the soldiers at the front gift parcels of random gifts. So, Edith had sent a gift parcel of cigarettes and tobacco to an anonymous soldier serving with the British Expeditionary Force.

In due course, Gran received a reply to her gift.  It was written in pencil on a flimsy khaki coloured postcard addressed to:

No County or Country was added but the county was Devon, in England and on the front of the Post Card, is the Censor’s stamp. The first word is blurred, but I assume it reads ‘READ by the censor. There is no stamp, but it is francked [1]  ‘Army Post Office 33’ and the date is 5th Jan 1915.

The message reads:  ‘Dear Madam, I have received your gift parcel of cigarettes and tobacco and would like to thank you sincerely. Hoping your New Year will be as happy as you deserve, I beg to remain yours thankfully

Black dots can be seen on the postcard, and I believe these are the censor blacking out the number of the Hussars and Calvary Brigade, so you would not know where the soldier was serving.  After scanning the postcard and editing with the photos, I think the numbers are 4th Hussars and 2nd Cavalry.  I thought his name was PALFREY but again, with today’s photo scan software, I was able to read it as POLFREY.

He joined the 2nd Cavalry Depot, 4th Hussars (The Queen’s Own).

The 4th Queen’s Own Hussars was a cavalry regiment in the British Army. First raised in 1685 it saw service for three centuries, including the First World War and the Second World War. The Colonel-in chief was Sir Winston Churchill.  The 4th Hussars deployed from Ireland to the Western Front in 1914, remaining there for the entire First World War (1914-18).

Pvt. John Polfrey would have seen a great deal of action in his young life and was awarded three medals for his services. The 1914-15 Star (or Silver War Badge),  The British War Medal, and the Victory Medal These three medals are also known as ‘The Trio’ ** 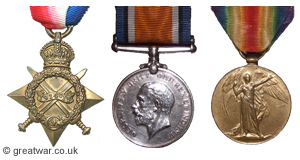 This collection includes records of British soldiers who survived World War I and were discharged from the ranks for honourable reasons of illness or injury. In September 1916 such men were honoured by King George V with the institution of a special award, the Silver War Badge.  Also known as the Mons Star, the medal is a bronze star with a red, white and blue ribbon, reflecting the French Tricolore. It was issued to British forces who had served in France or Belgium from 5 August 1914 (the declaration of war) to midnight 22 November 1914 (the end of the First Battle of Ypres).   [3] [4] 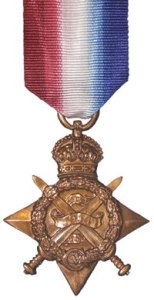 The British War Medal:
The silver or bronze medal was awarded to officers and men of the British and Imperial Forces. [3] 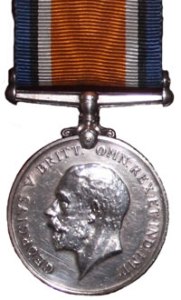 The British version depicts the winged figure of Victory on the front of the medal and on the back, it says ‘The Great War for Civilisation 1914-1919’.  To qualify, an individual had to have entered a theatre of war (an area of active fighting), not just served overseas. Their service number, rank, name and unit were impressed on the rim. [3]

Some men sent home after sickness or injury came under the close scrutiny of the public since many were perceived to be shying away from their duties to the country and were treated with contempt and sometimes violence.
The 1914-1915 Star (Silver War Badge, that Pvt. Polfrey was awarded) was intended to be worn with civilian clothes.  It had been the practice of some women in England to send white feathers, a traditional symbol of cowardice within the British Empire, in an attempt to humiliate men, not in uniform.  [4]

Pvt. Polfrey was discharged on 11 December 1917 and although I searched,  I could not access the reason for his discharge, although receiving the British War Medal meant that he was “discharged from the ranks for honourable reasons of illness or injury”.  So, I concluded the records possibly could have been burnt in the London Blitz of WW2.

In addition, on the My Heritage site, there is a family photo of Mr Polfrey, with the caption ‘Pop receiving the OBE with his wife and daughter’ there is no date, but it looks to be the mid-1950’s. I was curious as to what Mr Polfrey had received the Order of the British Empire Medal for, so further searching provided the following information. 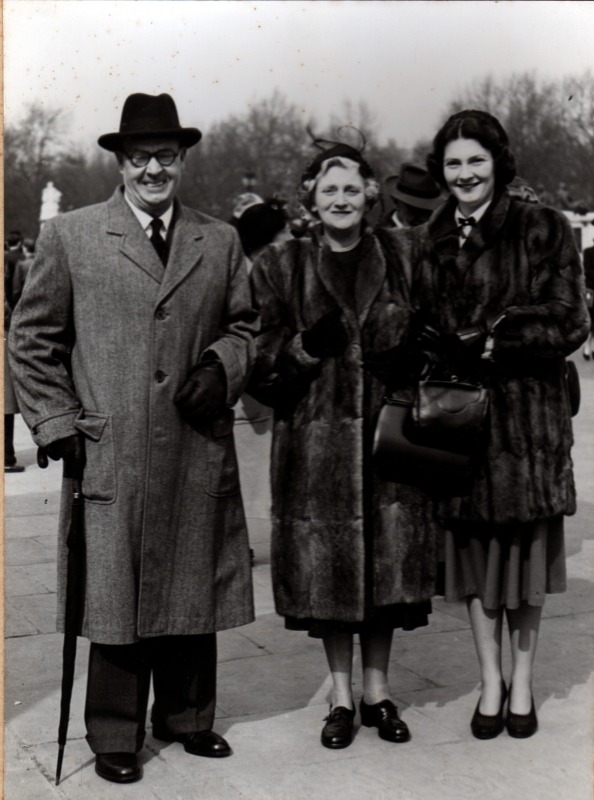 After 14 years of war rationing, which did not end until  4th July 1954, the Festival of Britain opened six years after WW2, on the 4th of May 1951. It celebrated the inventiveness and genius of British scientists and technologists probably in an effort to allow the citizens of Britain to feel that life was going to be better. [6]

What a valuable member of society Mr Polfrey proved to be!

Franking, a term used for the right of sending Letters or postal packages free of charge. The word is derived from the French affranchir (“free”). The privilege was claimed by the British House of Commons in 1660 in ‘A bill for erecting and establishing a Post Office,” their demand being that all letters addressed to or sent by members during the session should be carried free.  https://www.britannica.com/topic/frankin

*** All photos with permission of the Polfrey Family.