My Uncle was born second to the eldest daughter in a family of 11 in Cornwall, England.

My Dad never spoke of him, and I had no idea of his existence until I started to research the family tree, adding the family and my unknown Uncle.

My parents divorced when I was seven years old, and I had no contact with Dad’s side of the family after that event. However, my cousins, whom I met about eight years ago, were none the wiser although cousin Diane did speak of a family argument and the eldest son leaving the family home never to return or to be heard of again. EVER!

It was still a shocking event in the family.

What that argument was about I will never know. Many of the other children were not even born when he left. Nobody seems to have any photographs of him, either.

I was shocked to find he had died so young. Immediately, because it was the beginning of WW2 in England, I assumed he died in the Blitz, as so many in that area of London had, and his death certificate states he died in Pimlico which I knew was, like many other areas of London, badly bombed.

When I retired, I took the time to find out the reason he died so young. I decided to purchase his death certificate. When it arrived, it stated he had died of coal gas poisoning.

Thinking again of the war my first thought was he had died of gas poisoning. How awful! Then common sense prevailed. Of course not! Gas poisoning only happened in WWI, so I took a few deep breaths, and re-read the death verdict.

‘Coal Gas Poisoning; Did kill himself while of unsound mind’  Certificate received from WB Purchase Coroner for the County of London. Inquest held 17th June 1940.

Ah, so he had actually gassed himself poor Uncle! What on earth made him do it?

Gas was and still is, a common source of heat in England. Most homes including ours had gas fires. The gas then was coal gas, a very dangerous substance. You turned the tap on let the gas flow, and then lit it whereupon there was a loud POP! My Mum was always nervous about lighting it.

You had to be very careful that the fire, when the gas ran out, was turned off before you ‘fed’ the gas meter with shillings to re-establish the gas flow. Otherwise, you had odourless colourless gas flowing into your home and not realising it. Once a month the ‘gas man’ would arrive open and empty the meter and count the coins at the kitchen table. Depending on the amount of gas used, we would usually get a rebate of coins which were then fed back into the gas meter. 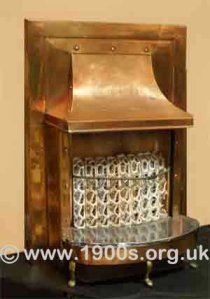 Photo Credit: Pat Cryer, with permission and thanks.

Committing suicide with a gas fire was easy, you just turned it on and did not light it. People accidentally died after forgetting to turn the tap of the gas flow off and feeding the meter, thus gassing themselves. Later in the 1950s a safety tap was added.

Because Uncle’s death was unusual a post mortem had to be conducted.

I reasoned that if he committed suicide, then there was a coroner’s report, which would be reported in a local newspaper. After hours of researching the newspapers of the area, I found what I was looking for.

Because this site is a subscription site, I only had access to this page and the text, so I had to re-write the copy [1]

The Westminster coroner (Mr. Purchase) held an inquiry at the Horseferry Road.

On Thursday morning. William McColl, 8 Rugby-street said he was a friend of the deceased. “He was in good health,” said witness. ‘and was in work. He was very moody.

Whenever I asked him what was the matter he would say’ Don’t take any take notice of me. I am a funny guy’

He had never said that would take his life and did not look the sort who might. He was in no trouble of any kind.

On Wednesday night last week, he put threepence in the gas. The next morning witness’s wife got worried about him and witness went upstairs and knocked at the deceased’s door. There was no answer.

On opening the door witness saw deceased lying the floor by the gas ring.

PC. Elliott, 4138. who was called, said he saw the deceased lying on the floor with his head resting on a gas ring. He was dead.

The gas tap was turned on, but the supply had been exhausted. Dr. M. Hains, who made a postmortem examination, said the death was due to asphyxiation from coal gas poisoning.

Herbert Rehm. chairman of Rhem Brothers.Ltd., said the firm had eight licensed restaurants in London, […]  was employed at a branch at Buckingham Palace-road.

‘Depression’ was not a word used in those days but obviously, that is what he suffered from.

One day, I hope to find if there were any children and so, like any genealogist who hits a brick wall, I keep searching.

[1] Whether you are a researcher, historian or you simply want to know more about Britain’s history, take this opportunity to search The British Newspaper Archive – a vast treasure trove of historical newspapers from your own home.

With many thanks to Pat Cryer, whose website https://www.1900s.org.uk is a valuable source of information on the social life of wartime Britain. Pat allowed her photo of an old gas fire, similar to the one in the story, to be used. Thank you, Pat.