The local newspaper in Saint John, New Brunswick, hit the jackpot when they interviewed 96-year old Mrs. James Peter Hanington in July 1948.  “”I always said I would not be old till I was 90’ said the charming silver-haired lady, with the sparkling dark eyes who was recalling her girlhood days in Saint John”[1].  From a remarkable retentive memory, Mrs. Hanington described events of many decades ago as though they were only yesterday, but was fully aware of and concerned about today’s issues.

One of her fondest memories included waltzing on skates to a live band with a gong sounding every half hour signalling the skaters to reverse direction.  She also recalled attending not-so-very interesting lectures at the Mechanics’ Institute with her girlfriends enabling them to meet the boys at those gatherings.

Entertaining was done in the home and was a simple matter due to the availability of affordable domestic help.  A cook’s wages were only $6 a month! The great expanse of her memories included a small playmate telling her of Lincoln’s death, the street lamplighter with his ladder going from lamp to lamp and the thrill of her first ride on a passenger train from Moncton to Saint John.[2]

Gertrude Davidson (my great grandmother), born in Saint John, NB, in April 1852, was the daughter of William and Mary Ann (Thorpe) Davidson.  Her father was a prominent lumber merchant and the grandson of the first settler on the Miramichi, who came out from Scotland at the age of 20. Gertrude’s earliest memories of her native city of Saint John were centered about the Davidson home at 98 Germain Street, the fine brick building her father erected for his family and to which she moved at the age of five.

Her father had been confident when the Great Fire of 1877 was at its height that the slate roof and brick walls of his home would be ample protection. He was wrong.

When forced to leave, her father had locked the door to keep out the thieves.  But fire proved a more thorough villain and all treasures were lost.

Gertrude saw the spire of Trinity Church fall that terrible day and was very anxious about the safety of the people.  However, blessed with a wonderful sense of humour, Gertrude commented on the strange attire of the people who attended a church service in the Victoria rink after the fire.  They had obviously escaped without their Sunday best![3]

As much as she loved Saint John, she moved her family to Montreal in 1890, when her husband, a successful local pharmacist, decided to go to McGill University Medical School at the age of 44.  Her seventh daughter (my grandmother) was born in Montreal in 1895, when Gertrude was already 42 years old.  While in Montreal, she raised her family, supported her husband’s new medical career, entertained frequently in her home and was an active member of St. John the Evangelist Church. She was very well respected in the community and enjoyed a large circle of friends.

During her long life, Gertrude had had her full share of illnesses and ailments but her knitting needles were always busy…and without the need of eyeglasses!  Perhaps being married to a Pharmacist turned Doctor had its fringe benefits! 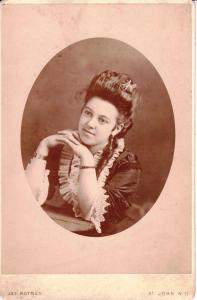 James Peters Hanington (my great-grandfather), and his older brother, Thomas, could make emulsions, ointments, pills or potions for just about anything that ailed you.  They were partners in “Hanington Bros., Chemists” in Saint John, New Brunswick.  Today, they would be better known as pharmacists. According to several testimonials in the 1884 Almanac and Receipt (recipes) Book[1], they were extremely helpful in alleviating all kinds of their customers’ health problems.  Here’s an example:

Having been troubled for years with pains in my side and severe cough, I was tempted to try a bottle of your “JPH Cough Mixture”, and also a bottle of your “Penetrating Liniment”.  I found immediate relief.  I have used two more bottles since, and am now perfectly well.  Returning you my sincere thanks for your cheap and valuable medicine.

In 1890, the partnership was dissolved. Thomas became the local Postmaster and James moved his pregnant wife and four daughters[2] to Montreal, Quebec, where he was enrolled in Medical School at McGill University.  He was one of few of his eleven siblings to leave the province, where his grandfather was known as the first English speaking settler and founder of Shediac, New Brunswick.

The first family home in Montreal, Quebec, was at 278 St. Urbain Street[3].  The family grew to include two more daughters, one born in 1891, shortly after their arrival in Montreal and another born four years later in 1895.  Six girls!  The last one born, when her mother was 43 years old, was my grandmother, Millicent.  Could she have been the result of a special celebration once James had finally completed medical school at the ripe old age of 49?

James graduated from McGill Medical School in 1894, having completed his four year degree, which included First Class Honours in Medical Jurisprudence in his third year[4].

A few years later, he moved his family to 699 Sherbrooke Street, corner of Park Avenue[5], which was a larger home to accommodate his growing family as well as his Physician and Surgeon’s[6] office.  His office hours “8 to 10 a.m., 3 to 4 p.m., 7 to 8 p.m.” were even listed in the directory!  He was a prominent doctor in Montreal for several years.

Although he settled in Montreal, he did, however, keep a lovely old home in Shediac, New Brunswick, called “Burn Thorpe”  where his family would gather in the summers and meet up with their cousins. 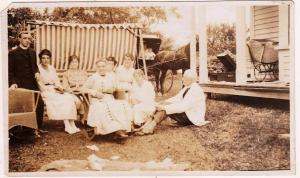 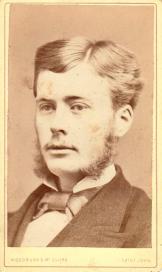