I trail closely behind my petite 97-year old aunt as she pushes her walker towards the residence dining room. Her recently repaired hip doesn’t appear to bother her as she purposefully maneuvers herself to the front of the line.

Ironically, she was born with a curvature to her spine and the doctors pronounced baby Mary “delicate” informing her parents that she would not have a long life.

“Ha!” she has been known to utter on many an occasion.

Another favourite saying has become “I shall never surrender!”[1] It is stated with such passionate theatrical flair leaving no doubt that she means what she says.

Her parents, Millicent and Sydenham Lindsay, provided their first born child with numerous quiet diversions such as books, art supplies and writing materials during her childhood. She was not to tax herself physically much to the dismay of her brother and two sisters. Consequently, her artistic talents and imagination flourished and by the time she completed high school, she was ready to perform!

Mary was a talented actress and enjoyed memberships in several different theatre groups in and around Montreal during the 40’s and 50’s. She also occasionally designed store windows in connection with the theatre that drew the attention of the local paper.

“A departmental store window display, depicting characters in a scene from Kings in Nomania has aroused considerable interest and admiration to the gratification of Mary Lindsay, talented young display artist who designed the window.”[2]

In 1950, Trinity Players and The Montreal Repertoire Theatre produced the play “Jupiter in Retreat” and 30-year old Mary won the best actress award for the Western Quebec Region in the Dominion Drama Festival for her leading role. The Herald raved about her:

“Mary Lindsay Kerr, actress playing a leading role, gave a performance of confidence, sincerity and absolute conviction. This artist didn’t put a foot wrong. She played right from the beginning with ease, and she had the power of making lines appear spontaneous.” [3]

The prize was a beautiful handcrafted painted wooden bowl that she later passed on to me. It currently hangs on my kitchen wall as a proud memento from my much-loved aunt.

The Cast of Jupiter in Retreat – Mary (front right)

Mary was blessed with a true soulmate when she married Robert Black-Byrne Kerr in 1946.  Not only did he continue to look after her but he shared her love of the theatre! They were known to host house parties with themes like “Ye Gods” where guests dressed in togas as Roman Gods and probably ate and drank excessively!

Lively games of charades were played at every family gathering. Halloween was a fabulous excuse for a little play-acting! Mary would dress up as a witch and stir a giant pot of steaming “witch’s brew” in the large front window while Bob handed out treats to anyone who dared to come close enough!

In the 50’s, they moved to Vancouver for Bob’s job and Mary was welcomed enthusiastically as “a prize winning actress” into the Vancouver Theatre Guild. She also developed a reputation for radio work (Trans-Canada Matinee on CBC) and several TV and screen appearances (she was the voice of Clarence the Caterpillar on the children’s “Peppermint Prince” program).

As they didn’t have children of their own, Mary and Bob took great pleasure in doting on their nieces and nephews. When they moved back to Montreal in the late 60’s, Mary taught me how to bake a “four egg sponge cake” folding in the stiffly beaten egg whites just so. Weekly tea parties featuring just the two of us were a real treat. Sometimes she would serve “backwards dinner” starting with dessert first! 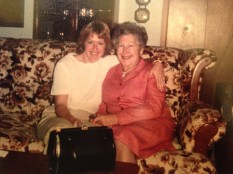 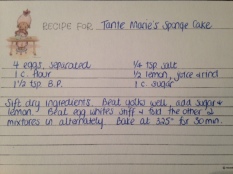 Over the years, we were often treated to hand painted watercolour cards sent to us for every special occasion. Her joie de vivre was obvious throughout her notes by the abundant use of exclamation marks. They were always lovingly signed: “Big Hugs, Tante Marie!”

(Tante Marie is presently residing in Ottawa, Ontario, where she is now doted on by her nieces and nephews.)