French Persecution of the French Huguenots

At the end of the 17th century, 60,000 to 80,000 Huguenots settled in the South West of England and were known as Britain’s first refugees.

The ‘Currant Examiner’ of September 1681, contains this quote that resonates today:

Plymouth Septem. 6. This day came in hither a small bark from Rochel, (La Rochell) with thirty nine poor Protestants, who are fled for their Religion: They report that five or six Boats more full of these poor distressed Creatures parted from those parts at the same time; and we hear that one of them is already put into Dartmouth. [1]

As I read the piece it appeared that the refugees were, in fact, heading towards Plymouth, where for centuries, the Devon ports were very familiar just as the Devon mariners were familiar with the Channel Islands and the continental seaboard.

This article continues my story of the Huguenot of England and in particular, South West Devon. https://genealogyensemble.com/2018/04/25/the-huguenot-of-england-part-1/ 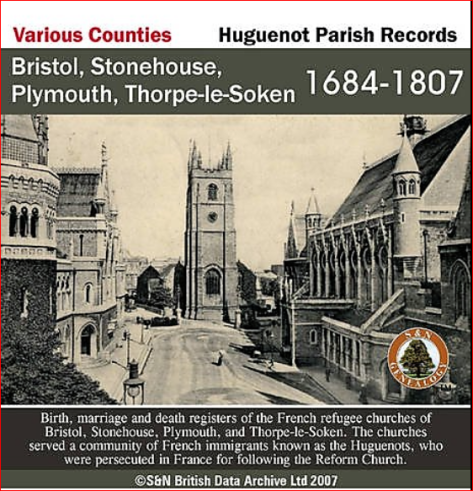 What prompted my interest in Huguenots? Well, I was searching online for places to visit on my next trip ‘home’ when I came across a reference to the Artist Dennis Severs’ house. The website told me: “Dated from approximately 1724, Dennis Severs had purchased a house at 18, Folgate Street, next to Spitalfields in East London and there, he created a time capsule of a Huguenot silk weaver family from 1724”. [₂]

I had no idea what a ‘Huguenot’ was so I decided to find out. I took a trip around the internet and discovered some interesting tidbits.

For instance, the Huguenot Society of Great Britain and Ireland (Yes! we have a society!) tells us that the Huguenots were known as Britain’s first refugees and goes on to say “there are many inhabitants of these islands who have Huguenot blood in their veins, whether or not they still bear one of the hundreds of French names of those who took refuge here – thus bringing the word ‘refugee’ into the English language” Who knew? [3]

They were actually welcomed to England by King William III in a Declaration.

“As King William III’s Declaration above makes clear, a distinguishing feature of this migration was the explicit state support it received. Six months after William of Orange had landed to take the throne of England The Declaration was printed in London in April 1689. William had long supported the plight of the Huguenots. His support was not altruistic because he understood the assistance this powerful group of refugees could offer him in his war with the French King who had persecuted the Huguenots – Louis XIV. The Declaration offers the historian a useful insight into the official government approach to the Huguenot arrival.

The Declaration clearly shows how William expected the English to welcome Huguenot refugees because of a presumed empathy with them born of the shadow of state persecution extended by William’s predecessor, James II”

Here’s one Huguenot refugee’s success story from the Independent newspaper.

“For 270 years after 1724, a Hampshire paper firm, Portal had – literally – a license to print money. In 1685, Henri de Portal and his brother, Pierre Guillaume were terrified refugee children, smuggled out of France in wine casks and sent on a perilous sea journey. It took the young Portals from Bordeaux to Southampton. Henri opened his mill in Whitechurch in 1712. Within a decade he had found his fortune through a banknote paper contract”. [4]

Although I was born and raised in Plymouth, England, I was very surprised to learn that the Huguenot and Walloons settled in my hometown and Stonehouse.

Kathy Chater in her book “Tracing your Huguenot Ancestors” states: “One of the major problems researching Huguenots in Devon is the impact of the bombing of the Exeter record office during the Second World War when many documents were destroyed. All the wills, for example, have been lost, although a project to reconstruct them is underway. However, it seems that even before this the records of the two Exeter Huguenot churches had disappeared”[5]

This could be one reason that I had no idea that Huguenots lived and worked in my part of the country. I wonder, is there a possibility of Huguenot ancestors in my family? Another avenue to explore!

Our ‘Mother Church’ in Plymouth is called St. Andrews and is designated a minster which is “A church that was established during Anglo-Saxon times as a missionary teaching church, or a church attached to a monastery”. [6]

An interesting note concerning St. Andrews Church is this:

Some churches allowed Huguenot worship outside of normal C of E services. (C of E means Church of England) and St Andrew was one of the main parishes in Plymouth that has registers where the Huguenots recorded baptisms starting at the back of the register.

This has been a very interesting journey and learning experience about a group of people who lived worked and died in my part of the World and of whom I knew nothing – until now.

These books on the Huguenot of South West England are of interest.

Peskett, Hugh. Guide to the Parish and Non-Parochial Registers of Devon and Cornwall, 1538-1837, Torquay, Devon and Cornwall Record Society; extra ser., v (Printed for the Society by The Devonshire Press) (1979).