“Just open the window, Dan, and they’ll hear you clear to Fredericton!”[1]  Daniel Hanington was nicknamed “Roaring Dan” by his fellow politicians in Moncton, because he had such a deep, booming voice. Although he thought of himself as a farmer, Daniel’s greatest interest was really politics.

Daniel was elected to the Legislative Assembly as Member for Westmoreland County (south eastern part of New Brunswick) in 1834. He served in either the Lower or Upper House until he died 55 years later, spanning the terms of 12 Lieutenant Governors. [2] According to the Saint John DAILY SUN, he “was a courteous, genial gentleman of the old school, respected by all who knew him… His election to the presidency of the Legislative Council in February, 1883, was a fitting crown to a long and successful political career, and he brought to the performance of the duties of this office an amount of political experience and a familiarity with public affairs in which he was absolutely without a rival among provincial public men.” [3]

Daniel was born to William Hanington and Mary Darby (the first English settlers in Shediac, New Brunswick) in 1804, and was educated at the Sackville Grammar School.  He actually was a farmer as well as comptroller of customs at the port of Shediac, New Brunswick, for more than forty years.  He retired from that post in 1880, at the age of 76.

His wife, Margaret Ann Peters (1811-1887), was the daughter of William Peters and Charlotte Haines, both having arrived in Saint John, New Brunswick, as youngsters with their families along with several other Empire Loyalists in 1783.  Charlotte came with an aunt and uncle and never saw her parents again.  She lost her little handmade slipper in the mud when she disembarked and the remaining slipper is in the Museum in Saint John.

When their children were growing up, Daniel refused two departmental offers, because the duties of the office would compel him to be away from home much of the time.  He preferred the country life, and to oversee the education and training of his children. Indeed, they raised a truly remarkable family.  All nine sons were first-class businessmen, including another successful politician like himself,  a lumber merchant, a broker, a rector, a barrister, a chemist and druggist (my great great grandfather – James Peters Hanington), a civil engineer, a chief surgeon and a comptroller of customs.   It was also noted that the three daughters had also “done well”, which I am guessing in those days meant they married men with family money and lucrative careers!

In 1881, Daniel and Margaret Ann celebrated their fiftieth wedding anniversary, with nine of their twelve children (one son died as an infant).  At that time, the grand total of their children and their immediate families came to 73 people and over half of them were at the party! 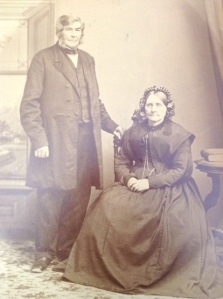 [1] as told by Mary Thorpe Lindsay Kerr (his great grand-daughter).