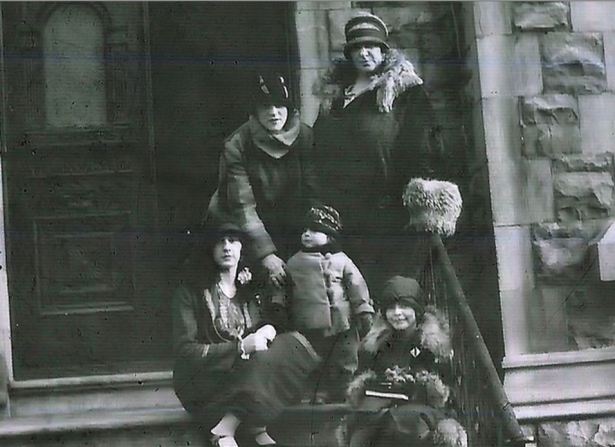 Maria Roy Crepeau and three daughters and a granddaughter in front of 72 Sherbrooke West in 1926 or so.

In the Edwardian Age, an ambitious young man, however resourceful, usually needed a solid financial foundation to kick-start his career.  If he didn’t have family money, he had to marry well. Take my grandfather, Jules Crépeau, (1873-1938). The son of a mere house painter, he rose up in 30 years from Messenger Boy in the Health Department to Director of City Services, the top civil servant at Montreal City Hall.

Jules didn’t have the advantage of a superior education; indeed, he completed his regular studies at night. He did have a workaholic nature, an affable disposition, a memory like a steel trap,*1 as well as a connection to the powerful French Canadian industrialists, the Forgets.

New information I found on the Internet reveals that the make-or-break-point for young Jules was in 1901, the year of his marriage. Back then, Jules was making only $600 a year, not a terrible salary for a single man, but certainly not enough to get married on.*2 So, Jules, like so many others, had to choose his wife very carefully.

My grandmother, Maria Roy, the daughter of a master butcher, brought a huge $40,000 dowry to their 1901 marriage, so I’m told. The next year, Jules had a house built for them on Amherst, near Ontario Street, and by a noted architect, at that.*3 Maria’s money!

Lovell’s Directory shows that in 1905 the Crépeau family moved to a tony stretch of St. Hubert Street.  Jules is listed as Head Clerk.  City Hall.   In 1918, they moved to St. Denis Street, just a few doors down from J. A. Brodeur, “Montreal’s Napoleon,” and Head of the Executive Committee. My grandfather was, by then, Second Assistant City Clerk, with a salary of $2,500 -$3,500.

It’s during this period, the Roarin’ Twenties, that my grandmother, Maria, finally started earning dividends on her dowry, taking  shopping trips to New York City to stock up on bourgeois bric-a-brac like marble urns, porcelain statuary, and art nouveau lamps; a complement to the whole roomful of ‘gifts’ the family received from various community groups, especially at Christmas. Jules and Maria needed a good supply of breakables. Family legend has it that the crockery flew over the stairs throughout their tumultuous 37 year marriage. 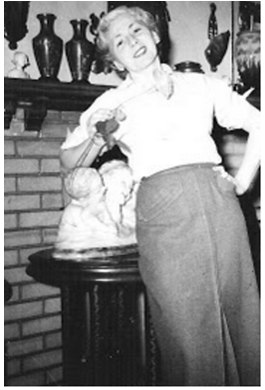 Aunt Flo posing in front of some Crépeau bric-a-brac on Harvard in the late 1940’s. The marble bust of three children actually ended up in my mother’s possession, gracing our upper duplex apartment in the 1960’s, but rather out of place among the melamine furnishings and artwork from Woolworth’s. Today, I own the orange art nouveau-deco Le Verre Francais “Amourettes” vase at top right.

In 1931, Jules Crépeau was forced to resign by the new populist Mayor Camillien Houde, but not before negotiating a huge life pension of $8,000 a year. But, soon,  my grandfather, who had no hands-on business experience, lost all of his savings with bad investments.*5  In 1937, Jules also lost his pension when Montreal City Hall passed an emergency bill to abolish it as a cost-saving measure. *6

Just two weeks later, Grandpapa was hit by a car driven by a plain clothes city policeman. He died the next year from complications. Jules probably threatened someone with a long reach.

Living out her life in the final family home on Harvard in Notre Dame de Grace, Jules’ wife, Maria Roy Crépeau (1879-1951) never complained about her situation as an impoverished widow, and this despite the fact her fat dowry financed the first years of the choppy Crépeau-Roy merger. Still, I suspect her story wasn’t at all unique, especially in the Depression Era.

Rue Jules Crépeau, Ahunsic, Montreal. Designated in the 1980’s. Funny story. In the late 80’s, when my husband and I were buying our first computer, the ONLY place in Montreal we knew that sold them was in  Ahunsic, where we seldom ventured. We got lost and stumbled upon this road and park. I had to find a phone booth to phone my mother to tell her that a street had been named after her father. Serendipity or what? Jules’ nemesis, Camillien Houde, has the huge road winding through the mountain named after him.