Good wages. Employment guaranteed. These words echoed over and over again in Mary McHugh’s head. And only some domestic experience required. Mary thought that she had quite enough domestic experience, thank you, as she was the only daughter still at home.

It was 1910 and Mary had turned 20 in February.1 Old enough to be married. No prospects in sight. She had been working at the jute factory since she finished school at 14.2 Like her older brother, Thomas McHugh, she immediately got a job in the jute factory as soon as she could. Mary’s mother, Sarah McLaughlin, was happy that Mary was working as Sarah was a widow and still had three children at home. Her husband, Michael McHugh, had died of tuberculosis when Mary’s brother, Francis, was just three months old.3  It had been a struggle for Sarah to make ends meet. Even though Sarah had managed to get a job as a charwoman,4 it was not easy. Sarah was exhausted when she got home, too, and it was up to Mary to help with the housework and cooking for her younger brothers. Mary’s older brother, Thomas, was already married with six children. He helped when he could but he had his own worries.

Mary thought ruefully about her job. She was a jute spinner at the flax mill.5 The mill was noisy and crowded. Mary worked twelve hours a day and it was back-breaking work. The women worked hard in the mills but made less wages than the men. The machines were dangerous. Accidents happened often.6 And then there was mill fever or brown lung. Most people who worked in the mill had a dry cough and sometimes even a fever.7 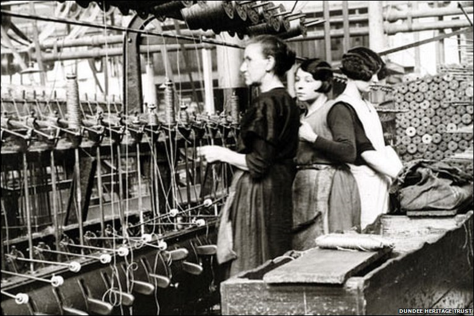 Photograph from the BBC8

Mary liked the idea of being a domestic. The hours would be long and she would be on her feet all day but the air would be clean and it would be quiet. But Canada? So far away? All by herself? Could she do it?

These thoughts were the beginning of Mary’s plan to emigrate to Canada. Mary McHugh was my great aunt and she arrived on the S.S. Grampion that sailed from Glasgow and arrived in Quebec City in July 1911.9

In the early 1900s the demand for domestic servants in Canada exceeded the number of young Canadian women willing to do this type of work. Governments, employers, and women’s organizations made a special effort to encourage the immigration of household workers.8 More specifically, British immigrants were considered as desirable immigrants to Canada. As of 1888, steamship agents received a bonus for selling the passage of a female immigrant whose intent was to work as a domestic servant in Canada. This was called the British Bonus and it came into effect by an Order-in-Council on September 27, 1890. Its purpose was to offer an incentive to desirable British immigrants. Often the Canadian employer would pay the fare of the immigrant to the steamship company.10 The emigrating domestic would then have to pay it back out to her employer out of her wages. This meant that the young immigrant woman was already indebted to her employer even before she started working. If she was unhappy with her employment, it made it difficult for her to find a better employment as long as she owed money.11

It is probable that Mary’s fare to Canada was paid by her employer. Beside Mary McHugh’s name on the passenger manifest of the Grampion there is a stamp British Bonus Allowed.

Hopefully Mary enjoyed her employment. She was the first member of the McHugh family to arrive in Montreal in 1911. She was probably delighted when her mother, Sarah, and three brothers, Thomas, Edward and Francis, followed her to Montreal in May 1912. And Thomas’ wife, Elsie Orrock, and their seven children, Ann, Elsie, Sarah, Francis, Mary, Adam, and Thomas arrived in October 1912. Mary married John Mervin Porter in June 1913 and her family would have been there to celebrate with her.

This poster from the Canadian Museum of History is from a 1926 pamphlet entitled Housework in Canada: duties, wages, conditions and opportunities for household workers but there would have been similar pamphlets advertising for immigrants that may have given Mary the idea.  This pamphlet says that “Canada welcomes men and women of the right type who come to seek their fortune in this broad new land … (people) of good moral character, and in good health, mentally and physically.” You can see this on the Canadian Museum of History web site in the section Advertising in Britain in the 1920s, https://www.historymuseum.ca/cmc/exhibitions/hist/advertis/ads7-06e.html 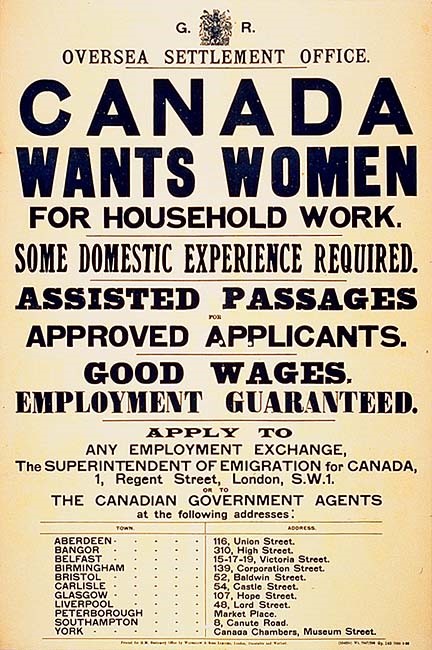