Genealogy is much more than filling in names and dates on a family tree.  It is also about the social history and context in which our ancestors lived.  It is about technological, economic, and social advances and how they affected our ancestors and changed their lives. This is why I love local historical societies and what they bring to local and personal histories.

The Montreal metro system changed everything about Montreal.  It improved the public transportation system and allowed people to go back and forth from work comfortably and quickly.  It also enhanced neighbourhoods and created synergies between different areas of Montreal.

The metro system was inaugurated on October 14, 1966 during the tenure of Montreal mayor Jean Drapeau.1 Montreal City council voted to build the metro system in 1961, and a year later, in 1962, Montreal’s bid for the world fair was granted and therefore the push was on to have the system completed in time for Expo 67.2 Expo 67, a celebration of Canada’s centennial, was held from April 1967 to October 1967.3

Montreal’s metro system is renowned for its architecture and public art.  Each station is unique.  Today, more than fifty stations are decorated with over one hundred works of art. Some of the more noteworthy pieces of art include the stained glass window at the Champs de Mars Station by Quebec artist Marcelle Ferron and the Guimard entrance to the Square Victoria Station. This is the only authentic Guimard entrance outside of Paris, although there are other subway systems around the world that have reproductions of Guimard entrances. 4 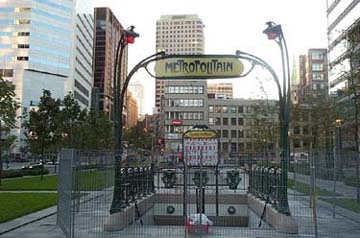 In celebration of Montreal metro’s system and its fifty years, Heritage Montreal is offering architectural walking tours of the Montreal metro system that include information on how the metro stations transformed the surrounding neighbourhoods.  These tours are open to all for a modest fee and will run every weekend until September 25.  Heritage Montreal is a non-profit organization that “promotes and protects the architectural, historic, natural and cultural heritage of Greater Montreal.”5 You can find information on these walking tours here:

In 2017, Montreal will be celebrating its 375th anniversary.  Over the centuries, the building of bridges, roads, the railroad, trams, and bus and metro systems have shaped and transformed the economic, social, and cultural aspects of Montreal.  The Montreal metro system is a beautiful and integral part of Montreal’s heritage.  Let’s appreciate it.