For some people, genealogy is enough. BMDs, children’s names and extended family trees keep them busy. But some of us want more. We want to learn the details of our ancestors’ lives, find out what historical events affected them – and then write about them.

Once a month a group of us meet at the Quebec Family History Society library to share our ancestor’s stories, try to improve our writing skills, and learn from each other. There are two rules: articles are limited to 500 words, and we must list our sources. It isn’t always easy, but it is fun. 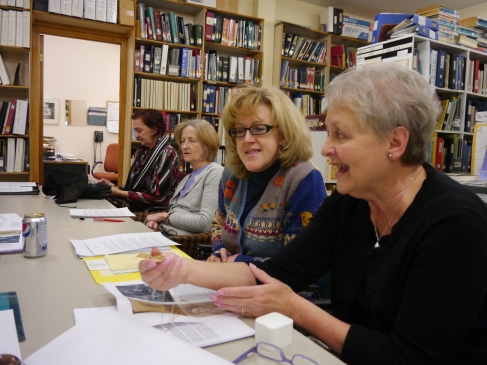 This month Claire wrote about her great-grandfather François Evariste Fortin, a merchant and contractor in Pembroke, Ontario who lost and then rediscovered his Catholic faith. Barb’s story was about her grandfather James Rankin Angus, a Scottish carpenter who worked on the construction of the ocean liner Lusitania, then spent 20 years running a book store in Quebec City.

Lucy has been writing about the Hanington family, the first English settlers in Shediac, New Brunswick. Janice’s subject was Robert Hamilton, a Scottish weaver who took up farming in Scarborough, Upper Canada. Mary told the story of great-grandfather Ismael Bruneau, a French-speaking Protestant minister.

Dorothy wrote about Norman Nicholson, her husband’s great-grandfather, an ordinary man who had one extraordinary habit: for five decades he kept track of every aspect of his life, from business expenses to a dating diary.

Oskar focused on Abraham Martin, from whom his granddaughter is descended. The Battle of the Plains of Abraham was fought on his land, but consensus about Abraham’s life ends there. Some stories say he was a farmer, others call him a river pilot. Some accounts say he returned to France for several years, others say he stayed in Quebec. Oskar clarified the confusion even if he didn’t resolve the conflicts.

Ruth wrote about her search for John Morrison. This being a common name, she couldn’t figure out which John Morrison in the 1861 census of Scotland was hers. John’s mother’s name was the less common Robina, and his daughter was also Robina, so she looked for Robina and found John in Illinois.

Next month some of us may do rewrites and others will tackle new subjects, but we are all making progress on writing our family histories, 500 words at a time. To learn more about this Special Interest Group, go to http://qfhs.ca/cpage.php?pt=90.

You must register to watch the live presentation. Or you may watch the archived version at your leisure without registering during the following six or seven days. A complete list of webinars, descriptions, and registration are available at Legacy Family Tree.

On Monday, January 20 at 9 PM (ET and PT), the Discovery Channel in Canada will broadcast a new three-part series, Klondike, about the Yukon gold rush in the late 1890s. Parts two and three will air on Tuesday and Wednesday, January 21 and 22. The series is based on Charlotte Gray’s book, Gold Diggers: Striking It Rich in the Klondike.  This is a rare opportunity to see part of Canada’s history on the small screen.

As genealogists, we often try to picture how our ancestors lived. While admittedly, TV and movies may not provide the most accurate portrayal of the time, they can still provide a sense of how people dressed and acted. As far as I know, none of my Canadian ancestors ventured to the wilds of the Yukon Territory. During the Klondike period, most of them were living in Montreal and Toronto. Nevertheless, I expect my ancestors were aware of the gold rush and perhaps some of them even dreamt of taking part. 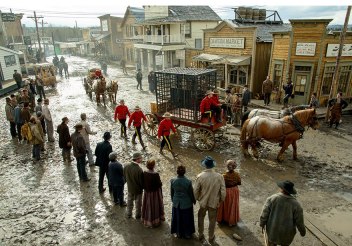 Any opportunity to help other genealogists and researchers is a good one, and The National Archives in Great Britain announced an interesting project this week.

The National Archives (TNA) has spent the past three years digitising WWI unit war diaries and now they are looking for volunteers. These diaries are among the most popular records at TNA.

With this project, TNA hopes to create new Citizen Historians, working together to make previously inaccessible information available to academics, researchers and family historians worldwide, leaving a lasting legacy for the centenary of the First World War. They need volunteers who can spend an hour of their time — or more — to read and tag a few diary pages.

Earlier this week, TNA published the first batch of diaries online as part of First World War 100. You can search and download more than 300,000 diary pages of the first three cavalry divisions and the first seven infantry divisions to arrive on the Western Front. By the end of this year, TNA will have published the rest of the diaries that they have digitised, around 1.5 million pages in total, opening up an already popular record series to historians worldwide.

To learn more about the project and how you can get involved, visit The National Archives Blog. Thanks to Dick Eastman who brought this story to our attention in his eNewsletter article, Operation War Diary: A Crowd Crowdsourcing Project.

A paper written in 1999 by professors at the Université de Montréal and Marianapolis College explains why so many French Canadians left Canada and it shows where they settled in New England in 1880 and 1930. “According to the 1980 American census, 13.6 million Americans claimed to have French ancestors. While a certain number of these people may be of French, Belgian, Swiss, Cajun or Huguenot ancestry, it is certain that a large proportion would have ancestors who emigrated from French Canada or Acadia during the 19th and 20th centuries.” To learn more, read French Canadian Emigration to the United States 1840-1930 by Damien-Claude Bélanger and Claude Bélanger.

At the Quebec Family History Society’s (QFHS) Brick Wall Solutions special interest group meeting last night, member Geneviève Rosseel led the meeting and made a terrific presentation about how to use newspapers to search for ancestors. Geneviève’s presentation included a handout she had put together that listed webinars, books, magazines, preservation techniques, Society resources, and 12 pages of newspaper websites.

The Brick Wall Solutions group, also known as the Brickers, is one of four special interest groups that QFHS members have formed where like-minded people get together to share ideas and solutions. The Brickers group is the largest and an excellent example of how genealogists work together to learn from each other. Each month, a member volunteers to lead a meeting and talk on one topic. Topics range from creating a research log to genealogical proof standards to mind mapping.

The Society’s other special interest groups are Family History Writing, the French Connection, and Newfoundland and Labrador Research Interest. More information is available on the Society’s website.

Here are some of Geneviève’s favourite websites:

3. Newspapers around the world –  http://en.wikipedia.org/wiki/Wikipedia:List_of_online_newspaper_archives

4. WorldCat lists newspapers held in libraries around the world – http://www.worldcat.org

The Kitchener Public Library in Ontario is looking for your help. In honour of the upcoming 100th anniversary of the beginning of the First World War, the library’s staff has created soldier information cards about the many courageous men and women of the province’s Waterloo County who served Canada in the First and Second World Wars. These cards were created during and shortly after each war and were compiled using newspaper and magazine clippings, photographs, and information contributed by soldiers and their families. 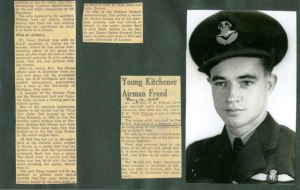 The library needs virtual volunteers to transcribe the content of the soldier card sets, making them searchable on the library’s online photograph site. The transcription process will involve copying the information on the soldier card into a text (.txt) file and sending the finished transcription back to staff for upload. If you are interested in volunteering for this project, contact the library at volunteer@kpl.org or telephone 519-743-0271, ext. 275. Read more about the project on the library’s website.

Perhaps genealogy societies should approach their local library to find out if they hold treasures that need to be digitized and posted online. This would be an excellent opportunity to support a library, create a new collaboration, and uncover genealogy gems.

What role do well-written bylaws play in association governance? Can you see how strong an association is by its bylaws?

Various branches of the OGS have them too, including Halton Peel at: http://www.haltonpeel.ogs.on.ca/bylaws.pdf

The Genealogy Association of Nova Scotia at: http://www.novascotiaancestors.ca/cpage.php?pt=22

In the United States, there are several, including:

The Association of Professional Genealogists at: http://www.apgen.org/organization/bylaws/

The National Genealogy Society at: http://www.ngsgenealogy.org/cs/ngs_bylaws

The Federation of Genealogy Societies at: http://www.fgs.org/cpage.php?pt=4

Welcome to a new collaboration between family history researchers who are keen to share ideas with other genealogists. We are a group of friends in Montreal, Quebec who meet on a regular basis to discuss our genealogy research and brick walls. Together, we tell stories and talk about everything from new websites, books, local archival centres, genealogy societies, and conferences to new technology and genealogical proof standards.

We are members of several genealogy societies and believe in the importance of good governance. To that end, we will also share societies’ best practices and discuss initiatives that can help a society play a role in the future of genealogy and grow its membership.

We hope you will join us on a regular basis and share your thoughts and viewpoint.

The event was the brain-child of executive secretary Joan Benoit, who has been helping run the QFHS for the past 32 years. “We basically want to bring members together to celebrate and share our common interests in a fun way.” she said. “It caught my imagination.”

The event took place from 1:30 until 4 p.m. at 173 Cartier Avenue, Pointe-Claire, just south of the highway. About a dozen showed up to enjoy coffee out of their own mugs and pleasant family history research discussion.

This was the third in the “Roots Day” series that took place last year. The previous one, Scottish Roots, was the most popular, attracting some 55 people. It was followed up by Irish Roots on March 20, English Roots on April 17, Female Roots on May 15, and Quebec Roots on June 19.

The series began the previous December with an event focussed on military traditions. That one attracted about thirty people over the afternoon and evening. Author and amateur historian Earl John Chapman was there talking about his books, including a history of the Black Watch and his most recent work, “Bard of Wolfe’s Army: James Thompson, Gentleman Volunteer, 1733-1830.” The work collects Thompson’s journals together with historical commentary to help readers understand the times. It might appeal to people with ancestors who served during the siege of Louisbourg, the Battle of the Plains of Abraham or the attack on Quebec City.